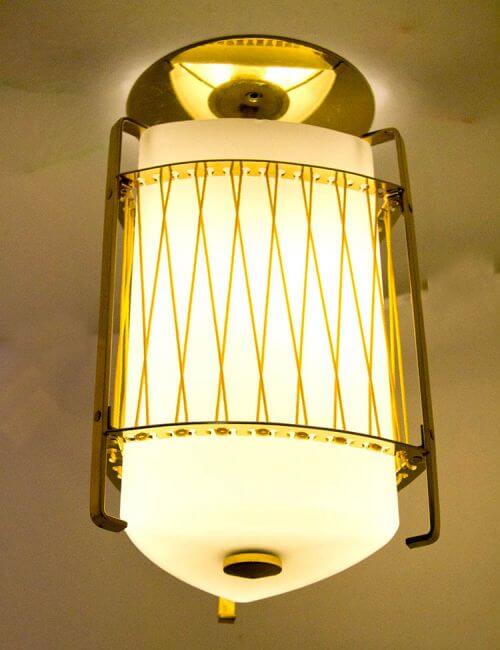 Stop at every garage sale. Ask new neighbors if they want their home’s old fixtures. Don’t forget the town dump. These were just a few of the crazy-in-a-good-way suggestions from our resourceful readers left on our recent story six tips to find affordable vintage lighting in a midcentury modern market gone mad, which bemoaned rising prices. These new suggestions can get results! Thanks to our determined readers — not too shy to share their methods for getting the good stuff cheap — here are five more steps to take to help you find that vintage fixture of your dreams. 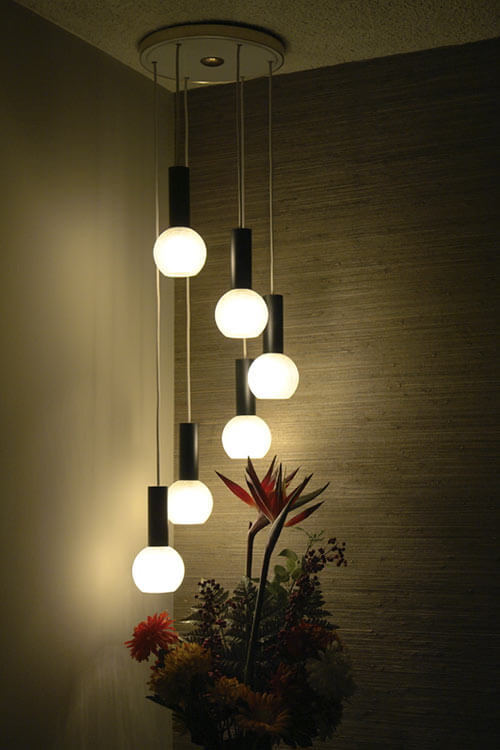 I started collecting in the mid-nineties although everyone thought I was nuts! The word got around and I have cleaned out many old houses, the best of which was my landlord’s grandfather’s house, an old 1700′s cape but full of mid-century stuff! They were filling up trash bags with everything because they were so sick of cleaning it out. I went through DOZENS of trash bags, and some fellow stopped and took the bags I went through for the same purpose! I have never gotten so much “stuff” out of a house as I did that one! I have enough saved to furnish our fifties ranch up in Maine short of mattresses and a TV, which my husband wants new. I have a garage full of my stuff and a cousin who does the same, and I figure I will have plenty left over to sell when done, which is what she does in her retirement.

Don’t be afraid to be a trash pick-up “gleaner.” You never know what might appear curbside the night before a scheduled trash pick-up. You can get really lucky sometimes. I know that I’ve set out all sorts of things with still usable parts in hopes that a “gleaner” might come by before the trash truck does – and they do.

Another way to score vintage lighting or anything like a led light panel is be aware of homes that contractors or home owners will bulldoze. While driving around I will notice a zoning sign for a house they will demo and follow up on it regularly. Often times if you contact the developer he will give it to you free or cheap. It is a way to keep things out of the land fill. Or at an estate sale they may be ok with selling the item that you can take off easily or they may be listing the house as a teardown so the fixtures will be for sale too. I will in addition look on Craigslist for things under teardown, demolished, bulldoze etc. and often times get great items. 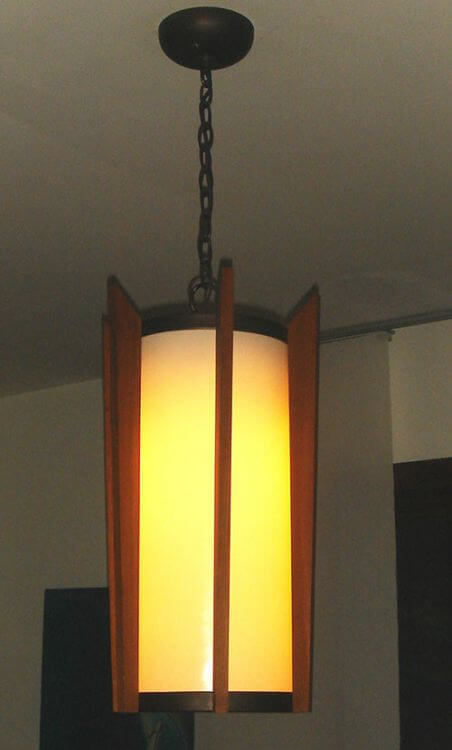 This mystery reader’s pendant light was from an old movie theater.

We have a local resource in my city’s historic district called the Artifacts Bank for this stuff. When old buildings are in disrepair and get gutted or demolished, some of the contractors try to save what they can and donate (sell? I’m not sure exactly how it works) stuff to the Artifacts bank, which they end up selling and then a portion of the proceeds goes to maintaining the historic district. The midcentury items are few and far between, but there are frequently MASSIVE drainboard and farmhouse sinks, doorknobs, doors, small quantities of beautiful old tiles, and light fixtures.

Don’t forget office buildings (or schools). A lot of commercial and insitutional building have great stuff that often finds its way into dumpsters. Ever pay close attention to the furniture and lighting in old schools, police stations, and other government buildings? I’d say more $$ for public spaces went to Herman Miller than residential $$s.

Oh, and I forgot my husband’s favorite vintage find location, the share table at the local transfer station, a.k.a. the town dump. This year’s scores were a large abstract stained glass window hanging for our bay window (not Frank Lloyd Wright, but similar in feel) and a stone base for my bird bath. He’s also seen stuff we weren’t looking for, like candle holders and a huge TV console. If you bring your trash to a transfer station, keep your eyes open for stuff left outside the bins and ask if you can take it. 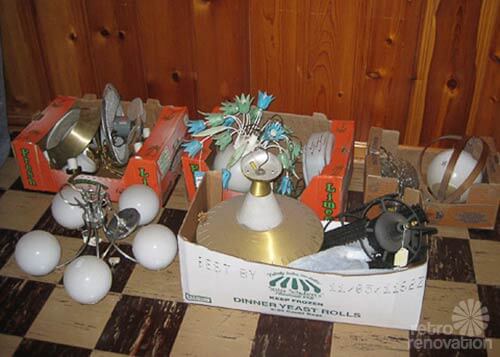 2. Stalk every place you can think of

Yes, the glory days of regularly finding cheap mid century gems, lighting or otherwise, are sadly over for the most part. I have been collecting 50′s and 60′s stuff since…lord I’m old…1980ish when I bought my first vintage radio at a flea market. Then I got into estate sales and could fill my car for very little money. It’s really sad to me that prices are so outrageous. My tips: 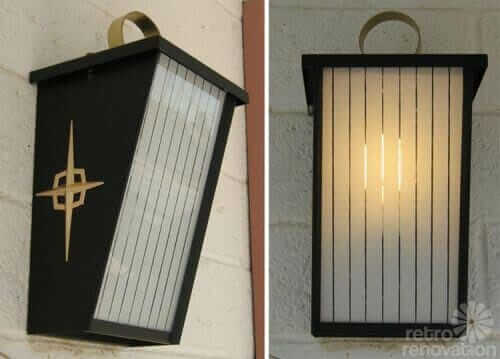 Jacquie recently scored a deal on this NOS Progressive light fixture — found on her local Craigslist.

3. Don’t give up on tried and true methods

GARAGE SALES. My husband and I have had great luck at garage sales over the years, especially at garage sales in rural or small towns where people see midcentury items and still only think of it as “old stuff.” 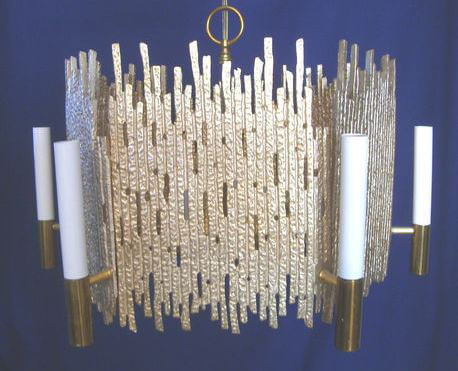 I would still look at ebay, Craigslist and shopgoodwill.com. I recently bought a starlight ceiling light on ebay for $50 with shipping, the same as at Rejuvenation (Nimbus), which sells for $210. I just had to put in a new socket. Also check out local auctions/salvage places in your area. On ebay try the ‘Buy it nows’ and offer less. Also, with a lot of the ceiling type fixtures, it is the shade that is expensive. Buy a simple base or use off another light and get a used shade that fits properly.

I’m surprised that nobody has mentioned consignment stores. I have residences in both Buffalo and Toronto and I find that antique stores, co-ops and estate sale purveyors are already “on” to the hot market for lighting, meaning that there are very few bargains to be had. Consignment stores, on the other hand, typically price their merchandise to sell. The two biggest ‘home consignment galleries’ in Toronto sell what I would consider top-quality, mid-to-high end furnishings from all eras at VERY REASONABLE prices. 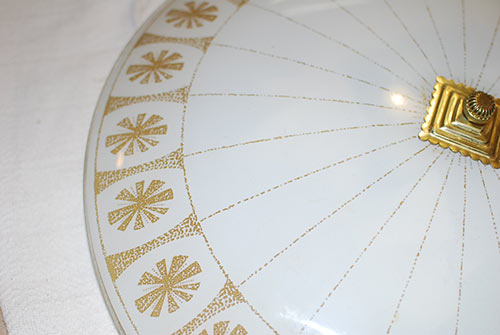 One of the 200+ vintage lights from Moon Lighting on Etsy.

I get a lot of great deals on ebay… they are there to be found. Not $5 Bertoia chairs, but for example I got a GORGEOUS pull-down lamp with a swoopy glass shade, and in near perfect condition, for $65 + $25 shipping. So, $90. Not $10, but you could easily spend $90 at IKEA on a chandelier. That’s how I think of all my vintage purchases: Might I spend this much on something similar at IKEA? If the answer is “Yes,” or “Nearly,” I almost always make the buy, because I’ve owned a lot of IKEA in my day and it won’t hold up as well as something that’s already 40-60 years old but in fab condition.

My ebay tips are: 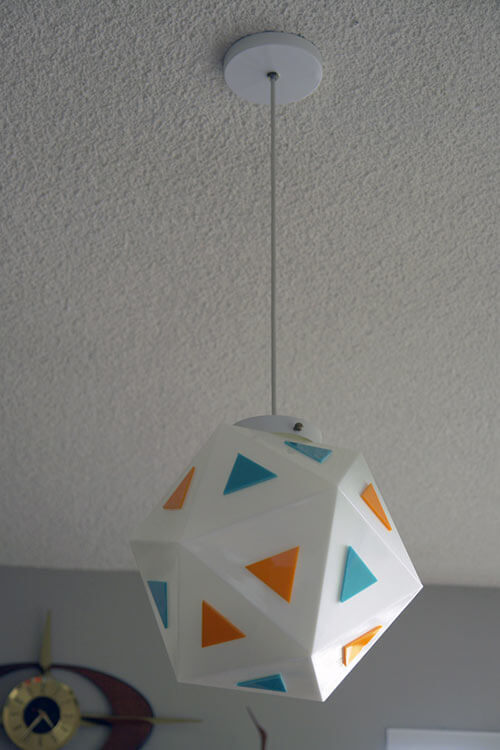 4. Ask nicely and you may recieve

Really, don’t be too afraid to knock on a door. This past summer, the house up the street sold. That house was built by the same contractor as mine, and they had identical Andersen windows. Not long after they moved in, we noticed a Pella truck parked outside. Sure enough, they were replacing all of the old windows. So, I summoned up my courage, knocked, introduced myself, and explained that we had the same windows that they were replacing. Long story somewhat shortened, we now have all the necessary window cranks, and replacement parts we will ever need to keep our original Andersen’s in good working order. All for free. They welcomed me to take anything I needed or wanted. They also told the installer to expect us to come poking around.

Also, make nice to the Habitat folks. After a little while, I became known, I like to think of it as affectionately, “the pink toilet lady”. They knew what sorts of things I was looking for, and actually put my phone number up on their bulletin board in the office. They called me whenever anything that might interest me came in.

As for the tip on scouting renovations in your neighborhood — we got a whole set of parts for our 1960 cooktop, as well as diamond backplates and cabinet handles from the tear out next door by just being interested. They didn’t want the stuff. We also got a couple of good pieces of the cabinet wood that matches ours that we can use in case of repairs. Don’t be shy. Most people — still — are throwing the stuff away, unaware that it has value.

Here’s my tip – get off the beaten path. Out here in rural America, mid mod madness has not hit. Thrift stores sometimes have lighting for cheap. Even antique shops might have some and they still sell it cheaper than Victorian and Arts and Crafts fixtures. 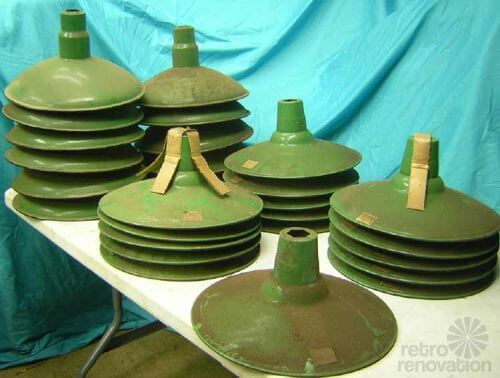 Part of a stash of 45 NOS reflector lights salvaged from an old factory maintenance room.

Were auctions on that list of where to find vintage lighting? The small local and farm auctions are great sources.

Oh dear readers, how we love thee. Thank you for sharing some of mid mod mad ideas for finding the good stuff — even if it does make us all sound a bit off our rockers. For those on the hunt for that vintage lighting deal — or deals of every kind! — good luck and may the Retro Decorating Dods be with you.

The post 5 more tips from readers: How to find vintage lighting at affordable prices appeared first on Retro Renovation.